There were a lot of interesting characters that worked with my squad; one of them was Private John Hennessy, or ‘Three Star’ as we called him, because of the whisky that bore the same name. Three Star had already been in New Guinea a full year when I arrived in ’43. He was the best Jungle Fighter I ever met, and had the luck of the Irish to boot. In the entire three years he spent in the Pacific, he was never wounded, never got malaria, or any other tropical disease aside from the ever-present jungle rot and bug bites! He used more bug repellant than anyone else, slathering it profusely on all his gear.

A Brooklyn born street fighter, he was very enthusiastic about patrol, and big into souvenirs! We had a lot in common, both of us coming from New York, and as he was often my number two gunner, we kept pretty close on patrol. One day, he was on point, and he hears something ahead. He goes to hit the safety on his carbine, but instead he hits the magazine release and the mag pops out onto the ground! As he ducks down to pick up the mag, a Jap LMG opens up with a burst that goes right through where his chest had been one second before! The spray of lead passes over his back harmlessly; by the time he stands up, the other guys have taken out the previously hidden Jap machine gun. And that was the luck of Hennessy, he made it all the way through the war unscathed; in the letters section, you can read some of his original battlefront letters which speak more of him than I ever could.

The sad part of it is that after the war things didn’t go so well for Hennessy. One day he just disappeared from his Dad’s bar in Brooklyn, where he was working. He turned up months later in Chicago, with total amnesia, washing dishes in a greasy spoon diner. His Dad brought him back home and when I went to see him in hospital, he was completely catatonic, curled up in a fetal position. I got right up in his face and talked to him for around an hour; but he didn’t recognize me or even seem to realize that anyone was there! I wept then for my friend, so young, so lost. He died a few weeks later, in his early 30’s.

We had reinforcements from the Papuan Infantry Battalion, dark native New Guineans with wild nappy hair and very little clothing. The Australians called them ‘fuzzy-wuzzys’. Their sharpened teeth were black from the narcotic betelnut they chewed; what English they spoke was thick with Aussie brogue. But they knew how to navigate through the tangled jungle terrain, and above all they hated the Japs, who had enslaved their people and caused them a great deal of suffering. We also had a couple of Filipino scouts who knew the ways of guerilla jungle fighting and had their own grudge against the Japs. The PIB boys would dash off into the deep jungle, often wearing nothing but loincloths or tattered army shorts, and bearing only a long spear with a Jap or Enfield bayonet attached to the end. They would seek out the enemy’s hidden positions, and then report the locations back to our rifle squads. And then of course we would close in for the kill, taking no prisoners. It was like we were fighting in the vicious French and Indian wars of America’s colonial era. 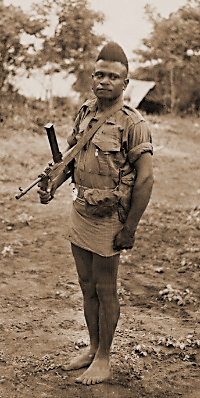 PFC Davies was another rifleman who had some interesting quirks; he always carried at least three extra bandoleers full of ammo for his M1 Garand. And when it came to laying down fire, he spared no expense. Back home the recruits were trained not to ever open fire unless a target was sighted. This was one of the first things we had to set straight when the replacements came in. In this kind of war you needed to lay down a blanket of fire to make the enemy keep his head down while you tried to maneuver. Very often at the slightest hint of movement in the bush, we would open fire. One night this happened, and in the morning instead of dead Japs we found a nice wild pig, that we roasted for breakfast! 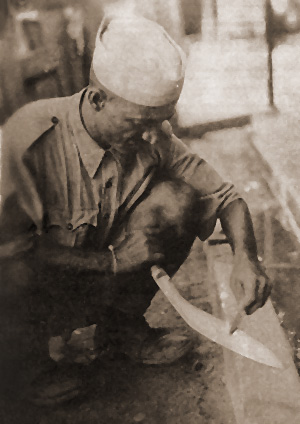 The Gurkha soldiers that were with us at the time wouldn’t touch the pig roast, these Nepalese born British trained soldiers were Hindus, and observed a strict diet. They were an interesting bunch of professional soldiers, who were just passing through ‘in transit’ and fought alongside the Australian units that sometimes reinforced us. When charging into battle they would politely exclaim: “Come along now you lads, everyone up front!” and the like. They had a herd of live sheep and big sacks of dried lima beans with them, which were the staples of their diet, and carried their distinctive Kukhri knives, long daggers with razor-sharp downswept curved blades that they used to great effect in combat. These Gurkhas were a wild and reckless bunch; you never knew when they were going to go charging off into the Jungle, or when/where they would come back out. I was relieved when they finally left us! 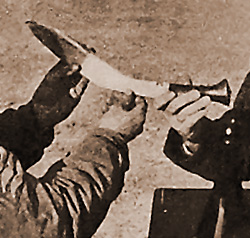 Davies liked fishing, and of course we had a special jungle technique for that as well. We would pick up unused Jap grenades, and when we got to a lagoon, toss a grenade or two into the water. This would stun the fish, and they’d float up to the surface, where our guys could skim them off with a shirt or poncho. The recipe for jungle style fish a la grenade is: Clean and filet the fish with your knife, lay the filets out on some hot rocks in the sizzling jungle sun, sprinkle a little lemonade powder from your K ration on for flavor, and voila, in 15-20 minutes you have fresh GI sushi au lemon!

Another jungle delicacy we once had was breaded parrot nuggets. One of the guys had got hold of some .45 caliber shot filled shells, and we were speculating on whether the big jungle birds had any meat on them. I stuck a shell into the breach of my Thompson and knocked down one of the colorful and noisy fowl, then a second, and then cleaned them as you would a chicken. Then, in my helmet, I mashed up some heavy crackers that I had got from the Aussies, some jungle butter and lemonade from our rations, and a little coconut milk to make a paste. The chunks of parrot meat were then dipped in this breading, and we fried them up in our steel helmets over a fire. After nothing but C rations, these were absolutely delicious!

While pointman on patrol, Davies was killed by a Jap grenade. He took the full force of the blast, while I was knocked unconscious for several minutes. I awoke to a large piece of shrapnel lodged in my hand, which took me out of combat for several weeks until I had healed.