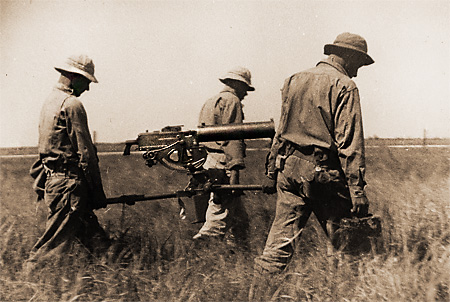 Three-Man Carry of the Machine Gun

One morning I was informed that I had a new machine gun receiver, with a device attached to the muzzle enabling it to fire blanks. Then came a briefing informing us of our assignment in the big maneuvers we were about to take part in. My machine gun team was ordered to stop an enemy advance consisting of infantry supporting a few tanks. We dug in at the edge of a field under an old billboard, and with only six cans of C rations, I figured this to be a relatively short mission.

I knew it would be a few hours ‘til the action, so I hitched a ride into town on a Jeep, and had a nice fortifying breakfast of ham, eggs, n’grits. On my way back, I remembered something I’d seen in a training film, so I picked up a package of paper plates. I had a plan to put ‘em to good use.

Later that afternoon, an Umpire in a Jeep stood dubiously examining my handiwork: Zigzagging down the road were a couple dozen paper plates, with a rock atop each one. “Landmines, you say? Well, it don’t seem to be breaking any rules, so landmines they are!” I was determined to stop that enemy advance using the full might of the Army, with every advantage that modern technology could offer…

In a few minutes, several old pickup trucks with the word TANK stenciled on the sides came down the road, and the Umpire stopped them, warning about the mines. The furious enemy Captain got on the radio to his HQ, and suddenly we all heard a shrill, angry voice spouting profanity over the walkie-talkie. General George Patton then proceeded to tear the hapless Captain a new one, offering: “Your fucking pick up trucks have 15 goddamn inch wheels; ride up on the verge for Christsakes and straddle the Motherfuckers!” 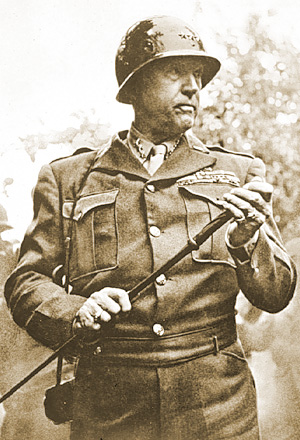 Eventually the ‘tanks’ overcame my minefield and the Umpire came over to my foxhole and informed us that we were all dead, and had to wait for the MPs to take us to a POW cage. We didn’t take to the idea of being guinea pigs for a week while the MPs practiced their Prisoner Interrogation techniques, so when a few riflemen who were awaiting capture with us mentioned a rowboat that was tied to a pier down the way, we all got the idea to see where the creek led to. 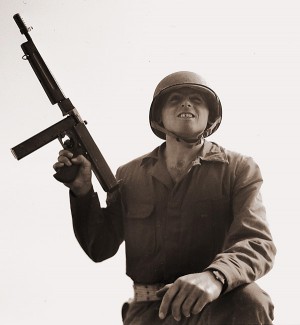 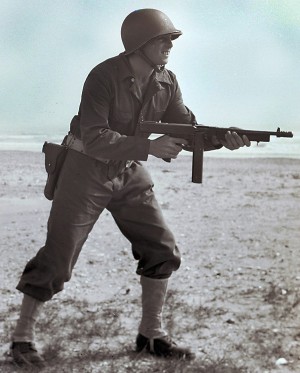 We floated a ways down the bayou, using some old planks as oars, and soon came to the farmhouse of a muskrat trapper. We convinced the grizzled old coot to let us sleep in his barn in exchange for having us do some work in his cornfields. He wouldn’t allow us to smoke in the old barn, and made us leave our matches and cigarettes with him overnight.

Next morning, we set to work with hoe and shovel, but the farmer got me to split logs ‘cause I was so inept at farm work. Later we were fed from a big pot of stew, the boys said the farmer’s wife made it from muskrat meat, with the scent glands removed. Some of the boys helped with skinning and stretching the muskrat hides, and the farmer passed around a jug of white lightning, some really strong stuff. I wondered out loud why the farmer had eight big cornfields when he only had couple dozen chickens. The boys all laughed and said that it went to make the moonshine that I had just tasted. That night we met Grizzly Lizzie, the farmer’s daughter. He had tried to keep her hidden away, probably a wise move with a half dozen young GIs hanging around, but she managed to creep away after dark, and one by one she offered her ‘Southern Comfort’ to the boys whom she fancied. Personally, I thought she looked a little too much like the muskrats she was raised on, and spent my evenings playing cards, or my harmonica.

About a week went by, when the farmer said he had figured out a way to sneak us past the ‘Red Army’ roadblock, so we could get back to our base. By then our C rations and cigarettes had long run out, and after a couple days of chick-feed mush for breakfast, I was actually looking forward to getting back to Army food.

Twilight time, a big old flat bed truck, full of crates of live chickens, was waiting for us by the side of the road. We paid the farmer’s son in law the half dollar each that we had agreed on, and began rearranging the chicken crates, sliding them out towards the edge of the truck bed, thus leaving a space down the center of the stack of crates that was big enough for us to fit between. Then we spread out some blankets and ponchos, and stacked a couple more layers of crates on top, making our crawlspace invisible from outside. He warned us all to shut up, and by the time we got to the road block, even the chickens had quieted down. The Red MPs shined their flashlights into the crates, but couldn’t see us; and when we got over to the Blue checkpoint, our driver shifted a couple crates at the back to let us off the truck. The Blue MPs kept asking us who we were, where we came from, and why we stunk so much? I guess those chickens we were riding with weren’t toilet trained. Then the OD came over and ordered us to clean up, had the CQ open up the showers, and issued us each a clean set of fatigues and a bar of army soap. Then he had one of the KPs heat us up some left over pasta and coffee, it was a great meal!

We sacked out for the night in the guard tent, and next morning we had a real Army breakfast of ‘shit on a shingle’ and coffee. After breakfast, we had to account for ourselves and before long our story of evading capture had got all over the MP camp. We were warned to keep it all quiet, and were rewarded for our ingenuity and discretion with three day passes! 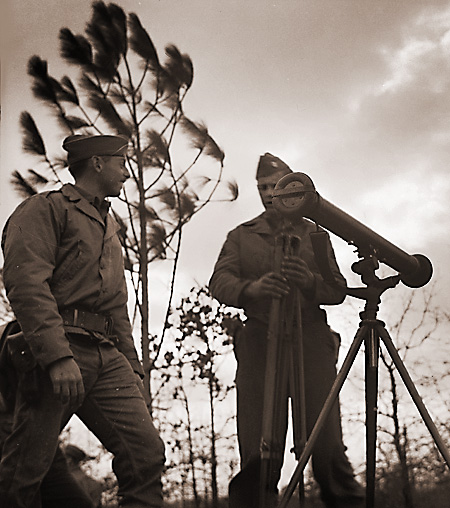 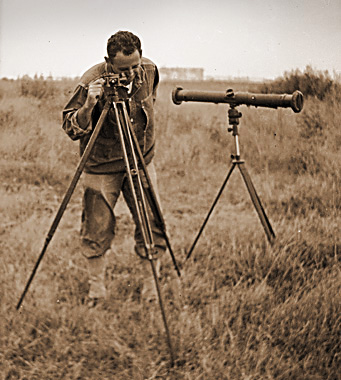 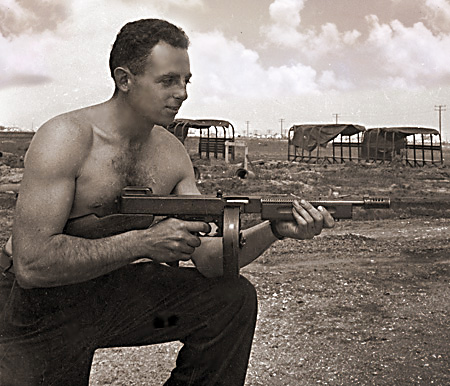 The Thompson with a Drum Magazine 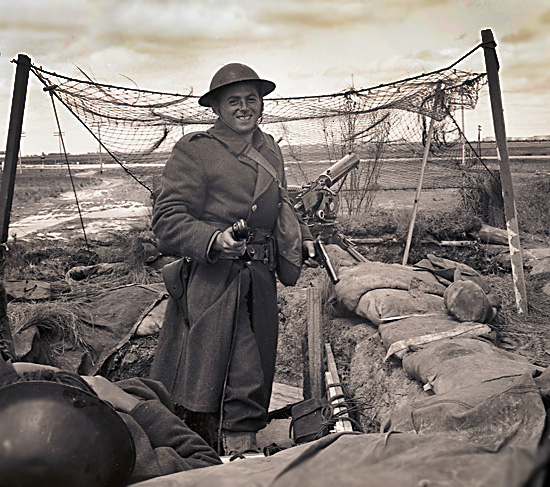 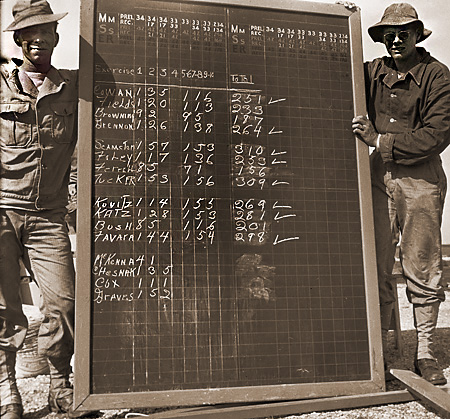 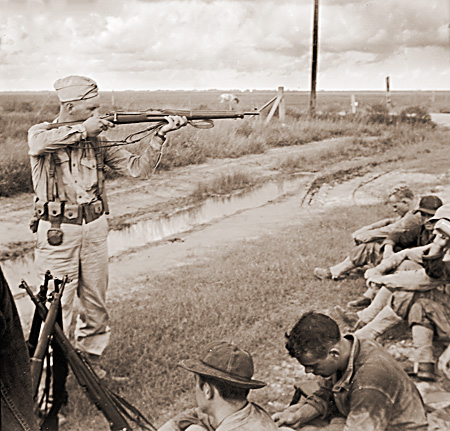 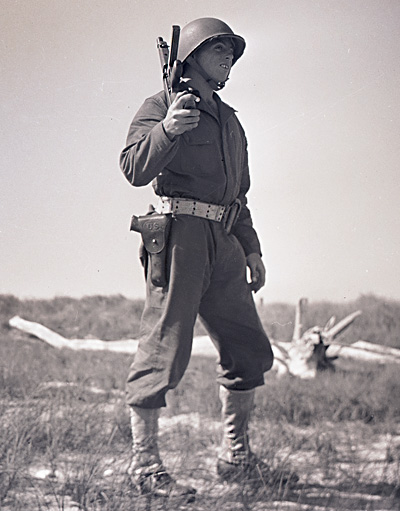 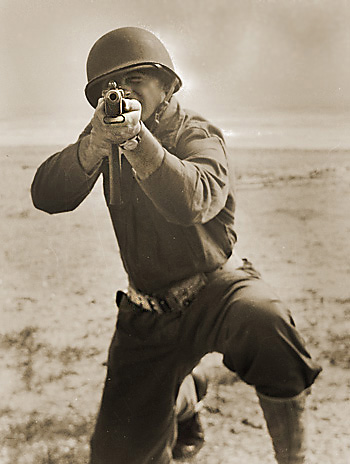 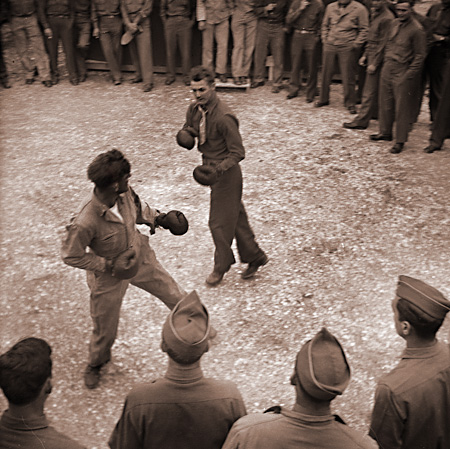