We had been brought to New Zealand for more training, and get organized for assignment at the “Repple Depple” (replacement depot). One morning the Lt. Colonel calls me and says: “Sergeant, you have two men missing, and it appears that they have gone AWOL with a couple of local farm girls; you have three days to find ‘em or you can consider yourself responsible for serving their prison time in Leavenworth.”

I was assigned a Kiwi trooper, a kind of Sheriff; and a Papuan scout, an expert in bush-craft and tracking. And so the three of us, the scout, the trooper, and the GI, set off into the mountains on horseback to track the runaways.

We had been warned that the fugitives were armed with shotguns, so I drew my usual Thompson, plus a .45 pistol and a couple of grenades just to be on the safe side!

The scout would be off at first light, honeycombing the area ahead of us looking for tracks. He would report back at lunchtime and then take off in another direction until dusk. The area was almost totally uninhabited; we saw no one at all. But the countryside was breathtaking, pristine virgin forest and jungle; panoramic vistas of hills and mountains in every imaginable shade of green. The threat of doing prison time if I didn’t return with the two deserters hung over me like a storm cloud. This was one camping trip that I wasn’t enjoying much.

Late the second day, the scout returned with good news. The deserters were hiding out in a secluded valley about an hour’s ride away. Obviously the girls had known about this remote hideaway and they had gone there directly. As we approached the valley, we spread out and came in from different directions. At a pre-arranged time the Kiwi trooper called out to the girls and informed them that they were surrounded and should surrender immediately. (Actually I couldn’t understand much of what he said, but I did make out ‘surrender’.) Suddenly, a shotgun blast echoed through the valley! That was my cue, and I let go a burst from my Tommy gun, and then tossed a grenade into the brush. Minutes later the four kids come out, white-faced and arms up! The girls looked all of sixteen, and my two lads not much older. We put the boys in cuffs and got everyone on horseback for the ride back to base. No one said a word on the return ride, I never saw any of the luckless four again, and I never even got a thank-you from the Lt. Colonel. Surely I wasn’t trained for three years and sent halfway across the globe to be a baby-sitting bounty hunter! 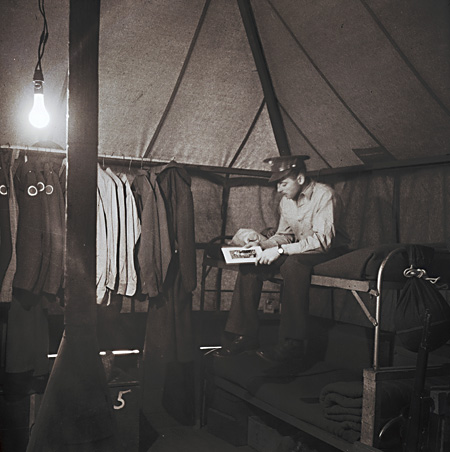