Mostly, the old hands in the 41st Division were from National Guard units out of the Pacific Northwest, lumberjack types who showed considerable disdain for the jungle, considering it something to be conquered, defoliated, destroyed. The new replacements, on the other hand, were very different. From the southern states, their attitude toward the bush was quite exceptional. They thrived in the protective cover of the foliage, always ready to improvise, using every feature of the landscape to their advantage. Our men had received virtually no jungle fighting training at all; most of what we learned in Army basic training was WWI trench warfare tactics! Well, fields of overlapping machinegun fire and trench sweeping are virtually useless when you can only see maybe forty feet at most into the jungle!

I always kept a spare barrel for the machine gun, one that was all shot out and didn’t shoot quite straight anymore. Whenever we took up a new position, I’d put in that old barrel and fire a belt or two into the treetops and surrounding foliage. I never knew if I hit anything, but we had lots of spare ammo, and I figured if I could discourage a sniper it was worth the cost. At the very least, it had a great effect on our boys’ morale!

I felt very fortunate that we had a lot of what we called hicks or hillbillys in our squad. These boys were mostly from the south, 18 and 19 year olds who had been brought up in the backwoods, hunting and fishing and tracking, and they knew pretty well how to handle themselves in the bush. Two of them, Bradshaw and Cartwright, always dug in right close to my machinegun. It seems the close proximity of the big .30 cal with its awesome firepower made them feel secure. Well, the feeling was mutual, because these boys could really shoot, and it seemed as though they could ‘smell’ snipers. No one could move more quietly through the brush than they could. I could never keep up with them through the heavy bush, and one of them explained, “If we made noise while hunting back home, we would go hungry.” It almost seemed like a game to them, when I’d go on ‘enemy checkout’ duty, I found out they’d use me as ‘bait’; when the Jap snipers would take shots at me as I was crawling along, Bradshaw and Cartwright would knock ‘em down! I wised up; this wasn’t my kind of game, and would go out in the rain whenever possible, because then the snipers couldn’t get a good shot! One day Bradshaw said: “stalkin’ ‘em Japs ain’t nothin’, it‘s jess like huntin’ deer, only these deer c’n shoot back.” To them an M1 Garand semi-automatic rifle might just as well have been some kind of wonderful futuristic ray gun; they‘d been raised shooting Granpappy’s cap and ball muzzleloaders from the Civil War!

They had all kinds of little tricks and tips: Jap snipers would strap themselves up into the crotch of a palm tree way up, and wait sometimes for days, with a couple of canteens and some dried food; when they had to piss they‘d do it down the trunk of the tree so as not to make too much noise. The hicks would look for streaks down the tree trunks as a sign there was a sniper up there! Some of these boys had such good sense of smell, they could actually sniff out the enemy! On one patrol, the kid on point stops and sniffs about just like a hound dog. Well I can’t smell anything but us, then he says to me: “I c’n smell food cookin’, Pops, somewhere’s not too far away.” The Japs didn’t have C rations that were ready to eat like we did, they had maybe a sockful of moldy rice and a tin of whale meat, eel, or tuna (if they were lucky), also their salty pickled plums; they’d have to set up a fire and cook that rice in order to have a meal. So we tracked ‘em to their campfire, then instead of just attacking them right off, I had the boys surround them real quiet and set up to wait. As soon as one of those Japs takes his mess tin off the fire to start eating, I give the signal and we fall on them and wipe them all out. Then, we grab up the food; see, it’s all nice and hot, ready to eat, and beat it out of there in case there’s another enemy patrol nearby. I just figured ‘why waste good food?’ And so we waited until it was cooked before we attacked; ‘fast food jungle style’. At this point food was so scarce we weren’t too particular where it came from. I also quickly learned the Jap Kanji symbols for whale-meat and also for quinine!

Well, I didn’t really care where these boys got their ideas, they were damn good at being riflemen, and at woodcraft besides. We had another hillbilly called the Professor; he was always improvising and coming up with crazy schemes. At the time, we didn’t have any mortars, and one day the Professor gets busy with some old bicycle inner tubes and a Jap helmet. He attaches a length of rubber tube to each side of the helmet, and then ties the loose ends to some tree trunks, then puts a couple live grenades into the helmet, pulls it way back and lets her go! This improvised slingshot could chuck those grenades way further than you could by hand! He’d also rig up all kinds of crazy booby traps with grenades and fishing line, setting trip wires that had delayed second stages so when the Japs would trip the line and hear the fuse go off, they’d run back and retreat right into the second, bigger charge! I’d had some demolitions training, so I figured I’d try my hand at it too. One day I found a couple of 90mm Jap mortars, and figured I’d set up a trap. I discarded the fuses, ‘cause they were contact fuses and I wanted something that I could trip with a wire. I then unscrewed a couple of our grenade detonators and mixed in a bit of powder, then taped them on to the mortars really tight. Then I buried everything on two sides of the track, and ran some fishing line back to my foxhole, pulled the safety pins on the grenade detonators, ran back and settled in to wait. Round about dawn, the Japs’ favorite time to attack, I hear them moving forward through the brush, and when they seem to be near my little surprise, I pull the line and all hell breaks loose. See, they hear the sound of their own mortars going off into their own positions, and retreat in total chaos.

So much for that morning’s Jap attack! 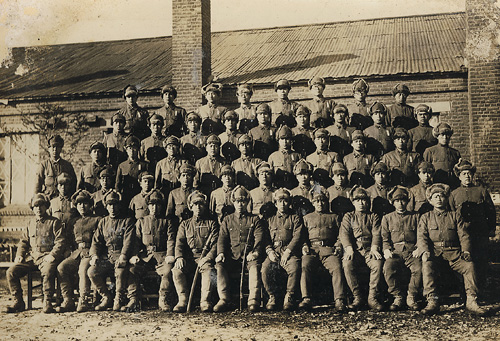 While flying over enemy positions in their little Piper Cub planes, our artillery spotters would take a lot of enemy fire. The Cub was unarmed and unarmored, so I’m sure these guys sometimes felt like sitting ducks. They came up with a pretty neat trick: using empty jars from the kitchen, they would pull the pin on a grenade, and put it in the jar. When they spotted the Japs, they would drop out these jars, and when they hit, the glass would shatter allowing the grenades to go off. This was basically an improvised time delay mechanism, and it worked very well.

I was always cleaning my machine gun, as I believed that my life and the lives of my men could ultimately depend on its devastating firepower. The Captain would come down the line, inspecting our fortifications, and would chide me with: “Man, you’re married to that gun, every time I come by you are cleaning it!” Truth be told, I did have an ulterior motive; I saw that he would send any grunts that were not busy to dig more foxholes and I would much rather be safe in my hole, close by the big gun, out of sight of the goddamn snipers!