I was with a group of supply bearers, all Negro GIs; supposedly non-combatants, these support troops humped in tons of ammo, food, water, and med supplies, on their backs, and evacuated our wounded. With very little firepower, usually just a carbine or .45 pistol, these guys would get ambushed and take casualties just the same as we combat troops did. In my opinion, they were among the bravest soldiers we had. I just couldn’t believe how some of the southern boys would belittle them and call them ‘White Niggers’.

I was going back to the beach to get replacements for my squad, and barrel packing for the machine gun. We were carrying out one of my guys that had been headshot; he was in pretty rough shape. The track led through the jungle with ridges so steep that the guy in front would be holding the stretcher at his knees, the guy in back would be holding it over his head! Over one knife-edge ridge after another, we finally got back to the beach without incident, except for the head shot kid, who died.

I get my MG parts and then head over to pick up replacements; usually ‘re-treads’, old wounded guys back from the hospital. This batch was all fresh-faced 18 year olds, straight from the ‘Repple Depple’. Suddenly this smartass Sergeant is in my face, saluting! He’s in fresh sun tans (khakis), creases still in the pants, shiny brass everywhere! (I found out later he had been busted out of the Air Corps and into the infantry as punishment for some kind of scam he was running.) It’s painfully obvious that this guy has zero combat experience. Polite as can be, I say “ Sarge, there’s snipers all over the place, it’s not a real good idea to go around saluting, it lets ‘em know who to shoot at.” All huffy now, he blows a whistle to get all the new guys to line up! Again I pipe up: “Sir, it’s probably not such a great idea to blow that whistle, and lining these men up makes them a pretty good target… and by the way, Sir, speaking of targets, you’re the only one on this beach wearing sun tans.” At this point he’s all red and says, “OK corporal, just pick out your dozen replacements and get back to your squad”. I tell the men “Everyone with size ten shoes or larger step forward!”

I get the men together and tell them what to dump from their gear: “Lose those packs and find a spare canteen, out on the trails its 110 degrees in the shade! You can’t carry anything you don’t need. You won’t require that blanket, shelter half, sweater or mess kit. Make sure that your bayonet is sharp and handy. Take your shovel, you might have to dig in fast if we get ambushed. Bring a couple K-rats in your pockets, and hang a couple grenades from your harness, with the tape removed! And ammo, Christ you all need spare bandoleers; three of you carry cans of .30 cal belts for the machine gun, and make sure you use enough bug juice, the mosquitoes here are big as sparrow hawks.” The recruits, observing the pile of discards on the left, and the bigger pile of essentials on the right, wryly muttered, “sure, you can’t carry anything you don’t need…”

Now we’re ready to go. The prissy NCO takes me aside and asks me “what’s the deal with the size ten shoes?” I point down to my rotted jungle boots; the only thing that’s holding them together is layers of black sealing tape from the grenade cans, and tell him “Sir, I’ve been taping these boots up for weeks, the coral just tears up the canvas and the damp rots ‘em out too. We haven’t seen new boots or uniforms in my squad for at least a month now, and I figure one of these new boys will ‘get hit’ soon enough, so why not get me the right size in those nice new leather combat boots they’re wearing.” The Sarge just says “Get the fuck out of here you cold blooded son of a bitch.”

We get back up to the line, about an hour hike through the bush, and I get the new lads to dig in. It’s pretty quiet except for the odd sniper shot, another scorching jungle day. In the late afternoon, who shows up but the fresh Sergeant with a Lieutenant in tow, to check up on our positions and supplies. 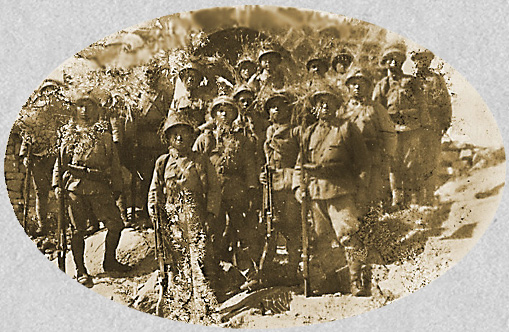 At dawn the Enemy attacked our position in force, and we had to fall back to our second line of defense, one ridge back toward the shore. Scrambling up the ridge under heavy fire, with the MG in a three-man carry, and every man with an ammo box or two, the Lieutenant takes a 20mm round through the chest, blows out his entire shoulder blade and leaves a hole bigger that your fist! Our medic wasn’t around and I knew he was a goner so I tell the men: ‘leave him! Each man grab two ammo boxes and get to the top of that ridge, pronto!” The dumb-ass Sergeant says: “No way I’m leaving the LT you bastard,” and he drops all his gear and humps the gasping semi-conscious man up the ridge. We frantically dig in and set up the gun, while the wounded LT is sucking air through that hole and bleeding like a stuck pig, moaning and bellowing as twilight came. I didn’t know what to do, so I grabbed my cloth cap and stuck it into the gaping hole to try and stop the bleeding. I tell the Sarge, who’s now in command: “Sir, him screaming and groaning is giving away our position and it’s also real bad for the new boys’ morale, Sir!” I grab my killing knife and make a move towards the stricken LT, to finish him off quick and put him out of his misery. The Sarge pulls his .45 on me and says: “Stay away from him, you murderous fucker! When we get out of this I’m gonna have you Court Martialled!”

All night we crouched in that hole on top of the ridge, the machine gun was steaming and blazing short bursts, though the Japs didn’t give me many targets. The LT would wake every few minutes moaning and hollering and giving everyone the creeps, as well as providing the Japs with a bead on our foxhole. We were getting low on ammo, but my machine gun was the main thing keeping the enemy from overrunning us! Down at the bottom of the ridge were several full ammo cans that had been dropped when the LT was hit; we couldn’t get to ‘em ‘cause there was too much shit flying around. The LT died around 4am, and after a scene with the Sarge, we chucked the body out of the hole, off the ridge into the gully. In the wee hours three of us went down that gully to fetch up cans of ammo. Two of us came back with four cans.
Again at first light, the Japs massed a charge on our foxholes. In the midst of it all, the Sarge starts blazing away with his .45 Colt, up on one knee just like as if he was practicing on the firing range! As I holler: “Get down man!” he takes a bullet in the back of the head, and once more I find myself in charge of the squad.

My machine gun, along with a couple of BAR’s and the riflemen, stave off yet another attack. I can’t figure where all these Japs are coming from, they look pretty fresh and fed, not all scrawny like the usual ones. (We later found out that a couple of Jap Submarines had got through the blockade and dropped off supplies and also a few hundred Marines and regulars.)

At the end of the day, I had my pick of several pair of bloody but serviceable size ten leather combat boots. 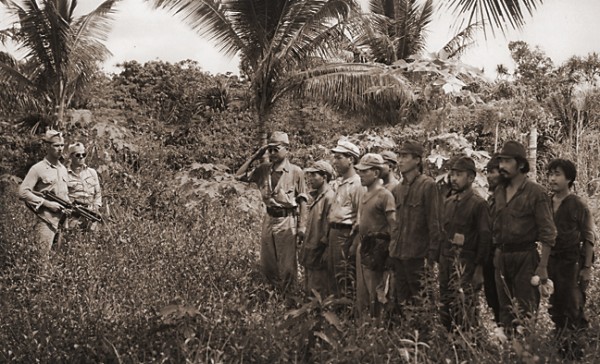