One of the main tasks we were on New Guinea to perform was the neutralization of Japanese airstrips. From these positions deep in the jungle, the Japs could send strikes on our shipping, beach positions, even Australia! We had no idea where they were, how many planes they had, or how many positions were involved. As it turned out, there were several airfields, but very few working planes. There was one however; one we called ‘Washing Machine Charlie’. He flew a beat-up old twin-engine dive-bomber, the model we called a Betty, and that thing sounded just like a washing machine! Charlie had become a real pain in the ass lately, because on one of his nightly runs along the beach he had bombed our food and ammo dump, causing severe supply problems for us! Finally one of our P38’s shot him down, and his crashed Betty was thoroughly scavenged for souvenirs. 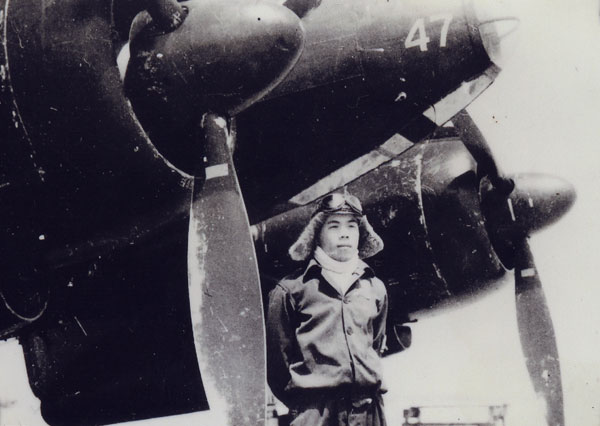 Another example of the Enemy’s decrepit attempt at mechanization on the islands was their use of tanks! The Japs actually had several light tanks, little two-man jobs packing one 37mm cannon and two .25 cal machine guns; although their usefulness in jungle terrain was questionable. They did give us a run for the money on the beach during one of our amphibious landings though.

First, the LCVP had got hung up on a coral reef about fifty yards or so off the beach. We were just thinking that we would have to debark on the reef itself, and try and wade in to shore, when one of our Destroyers opened up with her guns and shelled a cliff face that was giving us sniper fire, just aft of the beach. Suddenly, a huge section of cliff caved in, spilling itself out into the shallow water and forming an almost perfect bridge from our reef directly into the shore! We began gingerly picking our way along the sharp broken corals and rocks, heading gradually towards the relative safety of the beach. The GI right in front of me suddenly lurches forward, dropping his BAR and crashing right down on his face, into the water. I immediately thought he was hit by a sniper, when I noticed something moving swiftly through the water, away from his leg. A tiny red and white striped snake, maybe 12 inches long, big around as your pinky finger, this coral snake had brought death just as sure as a sniper’s bullet.

Now on shore, our guys were pinned down under fire from one of these mini tanks; the broken trees and driftwood offered scant cover from their machine guns. As the tank tried to climb over a large log, it got stuck and couldn’t move. Suddenly one of our new 18-year-old replacements jumps up with his rifle and hops right onto the deck of the tank! He stuffs the muzzle of the BAR into the peephole and starts pumping away, emptying his clip in a couple of seconds. Then he drops his weapon and just sits there, in the midst of a raging firefight, in full view on top of that tank, with a blank look on his face. I scream at him to get down, but he doesn’t react, just sits and stares vacantly into space! Fortunately the tank was dead, so I ran over and grabbed him by one boot and pulled him off. He was in total shock and had to be sent back to the aid station; that’s how heroic acts sometimes happened, you move, react, then blank out!