A Battle Poem by Joel Kovitz

We landed in New Guinea with hopes of doing well;
The snipers and machine guns gave me a taste of hell.
With bodies dropping ’round me I clawed my way ashore,
My mind upon the mission, I ignored the guts and gore.
By setting up the tripod with the swivel swinging free,
My #2 gunner killed a sniper in a tree.
I didn’t dig the gun in as the company moved ahead;
Through fire and plumes of shrapnel I was sure I’d soon be dead…
The water can was leaking, so short bursts would be my lot,
But two men with BARs kept my barrel from getting hot.
We used a three-man carry and brought the gun up front,
And as soon as we were settled I started in to hunt.
Though there were no targets, their snipers found our range,
Digging a three-man foxhole sure felt mighty strange.
Our riflemen were busy getting into the ground,
While our 60mm mortar man got off his first round.
And then it started raining so I filled the water can,
And filled my own canteen so I could feel like a prepared man.
The tropic night fell swiftly as we settled into the mud;
Our wily foe was out there, thirsting for our blood.
With morning came the mortar shells, thumping and roaring,
I crouched low in my foxhole; it sure wasn’t boring!
From the edge of the jungle the Japs looked like tough boys,
But Japs aren’t bullet proof, and our rounds weren’t just noise!
Our mortars blossomed among them, then moved towards me,
While I blessed my small shovel as I crouched on one knee.
Their second wave stopped and some turned to run,
With half a belt of ammo left, they were meat for my gun.
From the cliffs and the jungle they gave us weeks of hell,
When we landed in New Guinea with hopes of doing well…

A rifle cracked and our point man went down,
Davies’ M1 took care of that clown
Hearing sounds on my right I heaved a grenade,
Scurrying in retreat was the noise that they made
But not before they tossed their grenade!
The flash was so close I could barely see,
The grenade that killed Davies only wounded me.
The pain in my hand brought me out of my daze,
I had to do something to get out of this haze…
No machine guns were firing, the jungle was still,
The ambush was over; I got back up the hill…
With my hand in my shirt I grabbed my Colt and then
I stumbled back up the track to join my men.
As I crawled up the trail to our LMG nest,
Hollering ‘lollapalooza’, I hoped for the best.
The medic he sulfa’d and dressed my hand,
And tagged me so I could join the wounded band.
On line at the field hospital we waited for the Doc,
When he yanked out the shrapnel I screamed with the shock!
With my wound neatly bandaged I went looking for a bed,
Since I was ‘walking wounded’ I got a litter and two logs, instead.
The hospital was crowded, and very short of tents,
My shelter just a tent fly; it was better than paying rent!
The engineers laid duck boards from my fly to the mess hall,
Not wading through the mud made healing a ball…
My jungle rot was fading with the seawater and sun,
I was even getting fatter on three meals and no gun!
Now I’m back to my squad, there were many Japs to fell…
For I was in New Guinea with hopes of doing well. 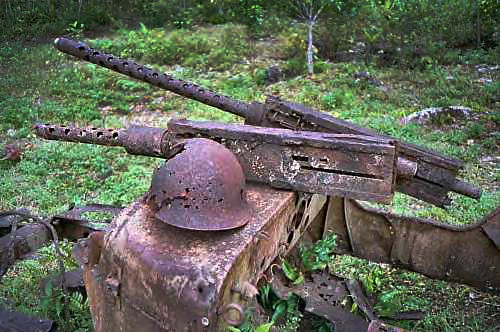