Eventually, large numbers of German POW’s from North Africa began arriving stateside. Generals Patton and Monty’s armored divisions had been kicking Field Marshall Rommel’s Afrika Korps all over the place, and many temporary transit POW camps were being set up around the country, mostly in the Southern states. Because of my ability to understand some German, I was sent to one of these camps, in Oklahoma, in the old ‘Indian Territories’.

These Afrika Korps prisoners were Elite personnel, Panzer crews and Storm troops, most of ‘em kids of 19 or 20, and a high percentage fanatic Nazis. The camps were very primitive, mostly just rows of tents and a couple of guard towers, without even barbed wire perimeters! The concern for discouraging escapees was considerable. We used old Pullman railway cars to bring the POWs out to the camp, with the windows painted black so they wouldn’t know where they were going.

As the POW train neared the camp, suddenly the sound of gunfire erupted from outside, then a shot shattered one of the blacked out windows! The MP shouted “everyone hit the dirt, boys you better hug that floor if you don’t wanna be shot by the Indians!” One of the Nazi NCOs peeked out the broken window, blurted: “Mein Gott, Indianen!!!’…and beheld a swarm of painted Indian warriors on horseback, attacking the train! The Sarge then calmly said: “Boys, this happens every time, the local tribes are tryin’ to get scalps, ‘cause Uncle Sam has put a bounty on escapees, 20 bucks a scalp, 25 if it’s a blond one!” He then fired a burst from his Thompson out the window and as if on cue, the ‘Indians’ vamoosed!

Well, if you haven’t figured it out by now, the ‘Indians’ were just some of our boys doing a little dress up to put the fear into the Nazi boys. It seems that the Old West stories by German author Karl May were very popular at this time in Germany; even Der Fuhrer was a big fan, and so these boys bought the ploy, hook, line and sinker. May, a low level teacher and sometime scoundrel, had written more than 30 books dealing with American Western themes, without having actually visited the USA! His stories had more to do with Germanic ideals than with Indian culture, and had been staple reading for German youth through the 1920’s and 30’s. We never had any problems with escapees, but once in a while the ‘Indians’ would pay a visit to the camp just for insurance! 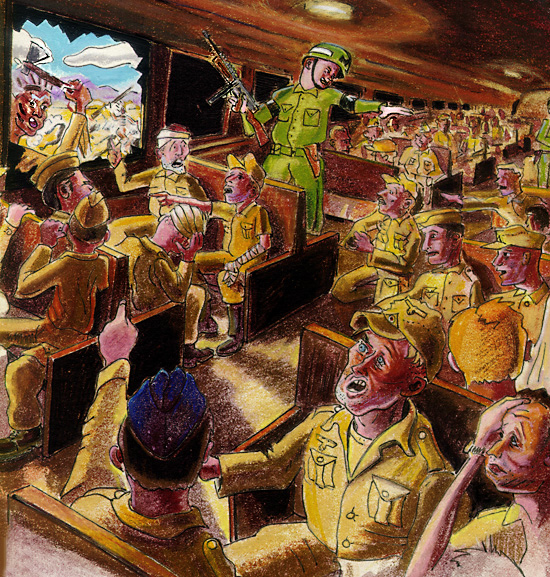 I was coming up for furlough, and was going to head back to New York to visit with family, when one of the prisoners, George, says “ Why go home, you know Herr Goering has bombed New York into rubble, you will find nothing left.” I smiled and told him I would bring back photos to prove him wrong. ‘ACCCHH, nothing but Propaganda” was his reply!

Because of my tough attitude towards the enemy, I was given charge of a group of POW’s that were so called ‘hard cases’. Most of these kids thought that even though they were personally out of the war, their cause, Nazism, would still prevail. The prisoners, in groups of 12, would be put to work at projects that were ‘Non-War Essential’. Before we were allowed to have any interaction with the prisoners in the camp, we spent a night reading the Geneva Conventions, to be fully aware of their rights. 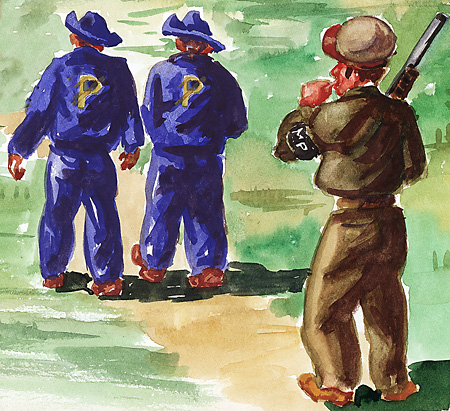 I would march them out into the badlands surrounding the camp, double time, and they would spend the day digging ditches for drainage, leveling roadways, and other such menial tasks. They would be supplied with plenty of water and food, and would take regular breaks. For this, they were paid $12 per month in credits at the PX. I would supervise the work and watch over them, with my Thompson for protection, as 12 to 1 were pretty stiff odds! In due course, the camp commander decided the Thompson was too intimidating a weapon, and switched me to an M1 Garand rifle, longer but lighter. One particularly hot day, the boys were taking their lunch break, and I was sitting in the shade, automatically doing a head count every few minutes.

Suddenly I realized I was only counting to 11! I jumped up and double- checked my count, sure enough 11! I scanned the horizon all round and not a sign of anything; the boys were looking smug and no one was letting on. Then the hair on the back of my neck bristled up in a strange way, I whirled around and there was the culprit, almost on top of me with his pickaxe raised up high, ready to strike! He had sneaked up through a drainage culvert that ran through the area in which we were working! I reflexively brought the stock of my Garand straight up into his jaw, so quick I didn’t even realize I had smashed his jaw to pieces; he was now laying on the ground unconscious, choking on his tongue!

As I looked down at him, I sensed movement and turned to find the rest of the squad angrily advancing with shovels and pickaxes. I immediately aimed the rifle at George, their leader, an NCO who had a little more sense than bravado, and he stopped the rest of them whilst I reached down and pulled the choking man’s tongue out to clear his airway. As the Garand only had 8 shots, and there were still 11 of them, this could be a tricky situation.

Suddenly, out of nowhere, a Jeep pulls up and out jumps a Sergeant from the camp; seems the whole incident had been observed by the Officer of the Day with binoculars, up in his tower! This would turn out to be very good luck on my part, because I would soon be facing a Court Martial, charged with abusing a prisoner! As it all turned out, I was fined $1.25, the cost of materials for wiring the guy’s jaw back together, I had to escort him every morning to the dentist, and I was otherwise to have no contact with prisoners, which put me on various duties such as KP and latrine. Soon it was learned that the internees, seeking revenge, had put a price on my head, so it looked like my days as a prison guard were over!